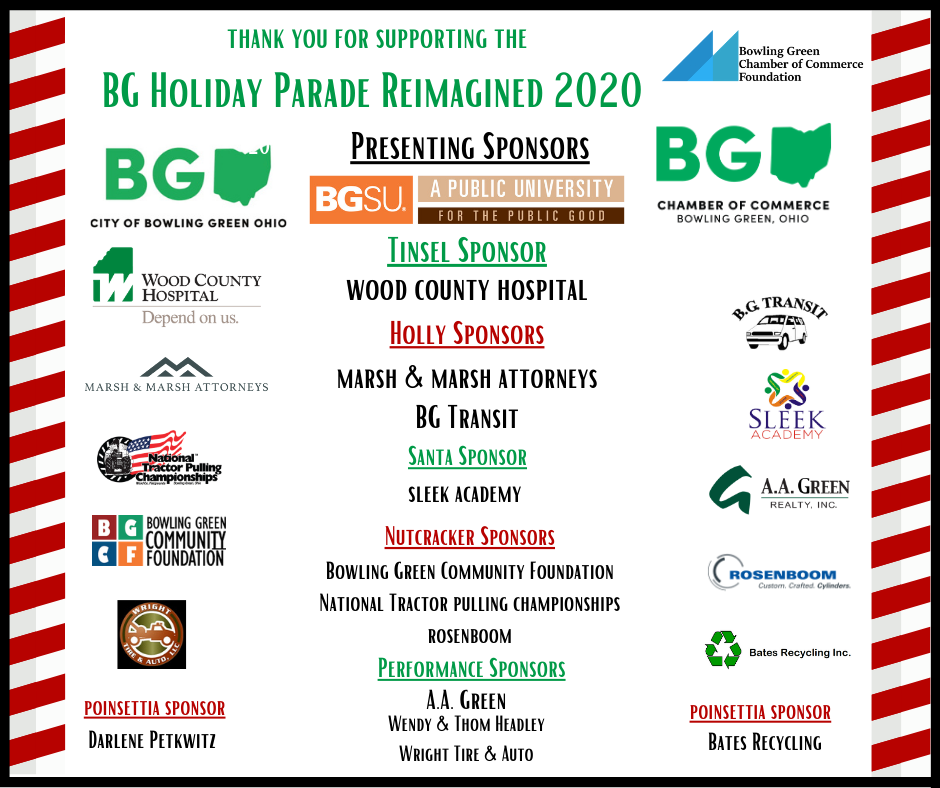 The BG Community Holiday Parade has been reimagined into a 2 ½ hour broadcast that aired on November 21 from 12:00 pm – 2:30 pm on WTOL11. It began with a half-hour pre-parade presentation with new interviews, exciting new performances, and holiday wishes from our community and concluded with last year’s parade in its entirety. You can view the presentation here.

Registration is now open to get a personalized video message from Santa. 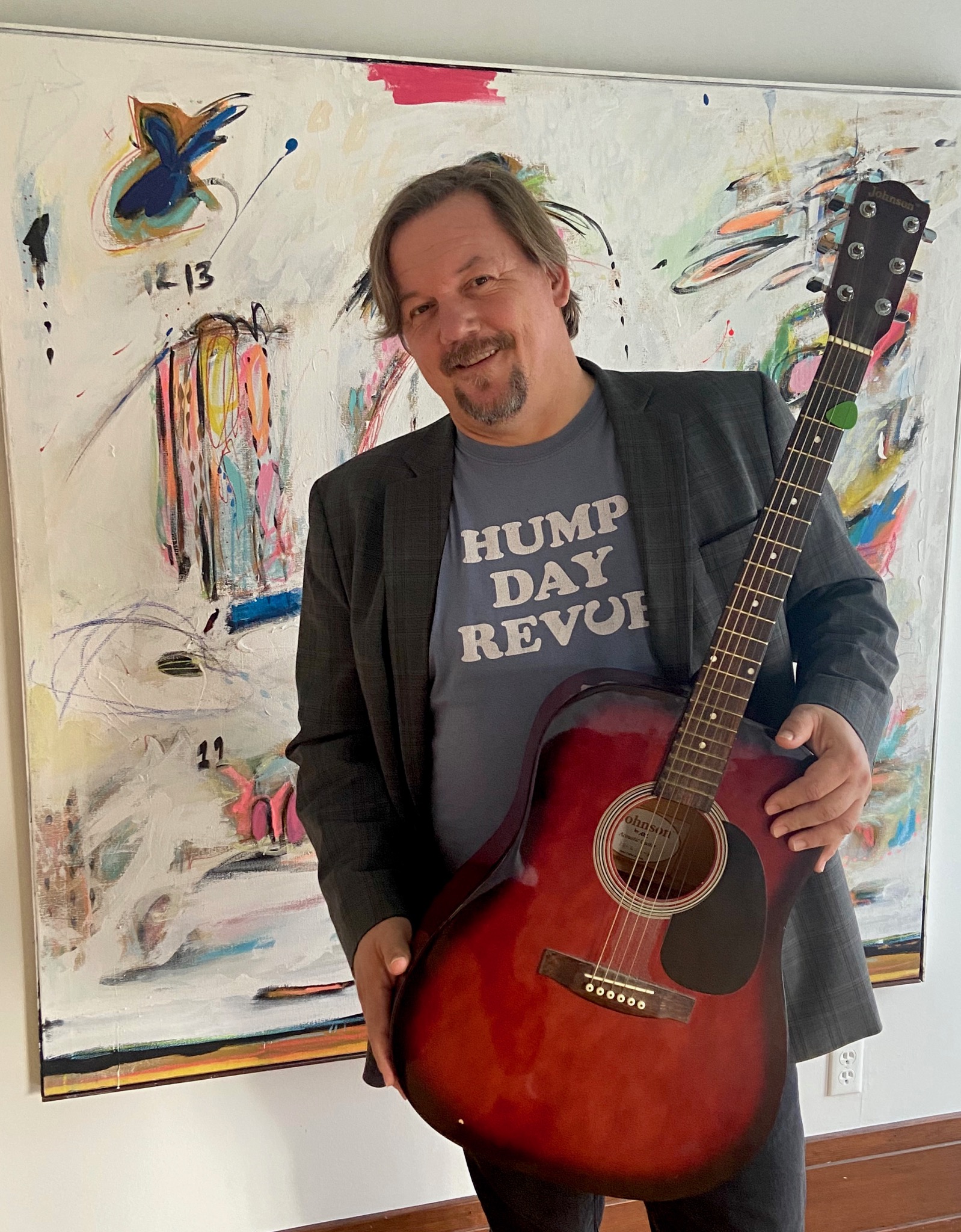 Tim Concannon (aka Timmy C) has been writing and performing music as a soloist and in bands for over 20 years. His repertoire comprises originals, classic rock, and blues. Tim's vocal acuity is his biggest musical strength and his laid-back, rhythmic guitar style is accessible to numerous audiences. In addition to being a songwriter and performer, Tim runs a weekly variety show he created in 2010 called the Hump Day Revue which live streams every Wednesday on Facebook at 9pm: https://www.facebook.com/HumpDayRevue/. Along with his good friend, Cole Christensen, Tim also proudly books the music for the Black Swamp Arts Festival in Bowling Green, OH where he lives with his wife and kids. 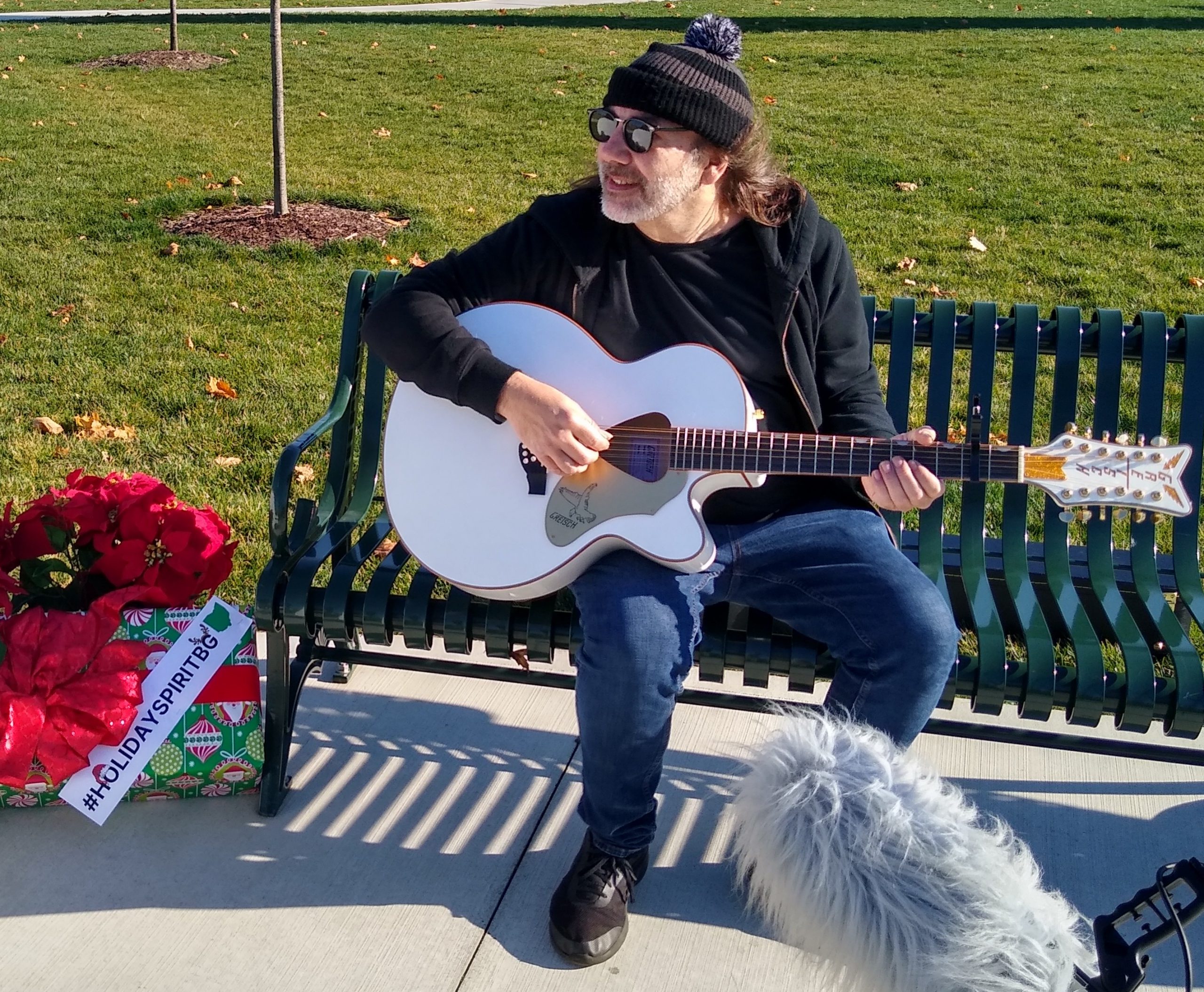 Mark Mikel has been a songwriter/performer for over 40 years in Toledo and has numerous albums and other accomplishments.  Mark was in The Pillbugs, a psychedelic band that

received international recognition. He tours, writes and records with Mountain drummer Corky Laing Mark  and had a recent collaboration with Jeff Kollman on a piece he wrote and sang lead vocal for on a new Alan Parsons Album.  This song “Fly to Me” is included on Parsons  newest album “The Secret”.   Mark also performs every Wednesday night at Howard's Club H in BG and every Thursday night at 6/5 Distilling in Perrysburg.

Mark performs his original composition “Christmas Morning” for or Parade Broadcast.  The song has a certain Beatles-like quality with Mikel’s voice reminiscent of the late John Lennon.  You can also view his music video of this piece on You Tube. https://m.facebook.com/mark.mikel.1?ref=bookmarks 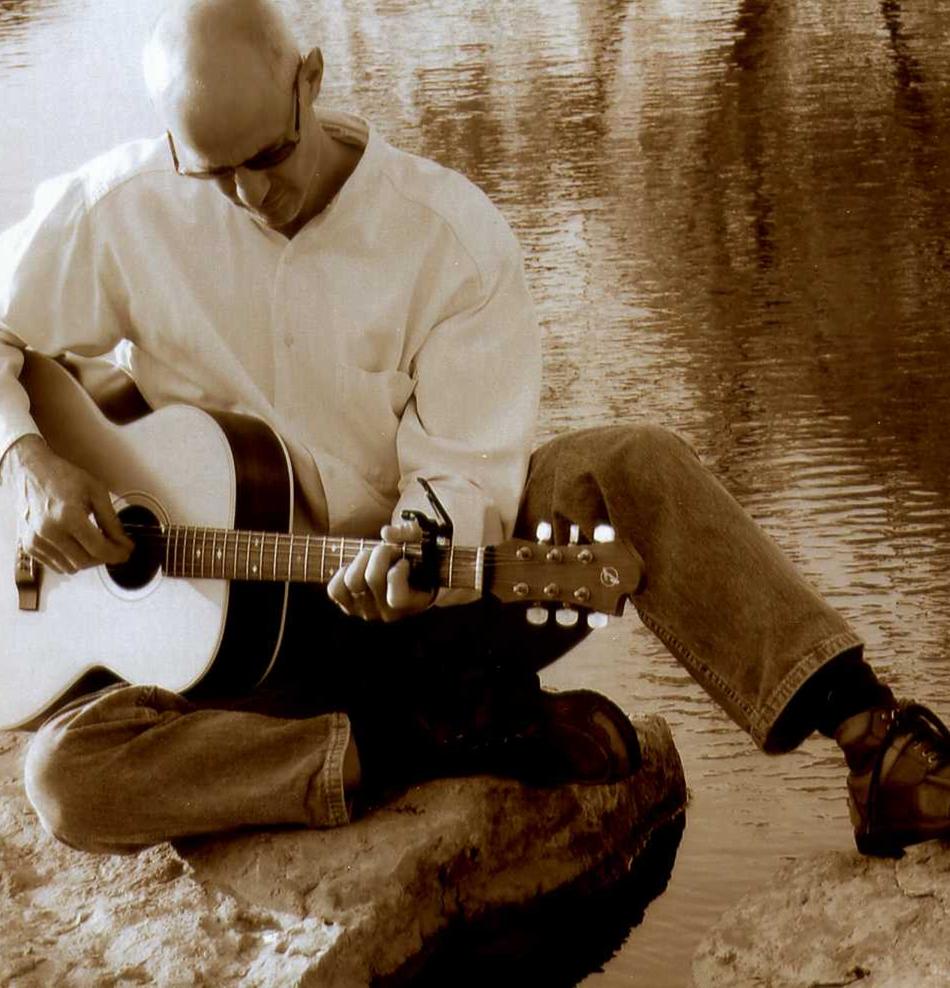 Tim Tegge, from Bowling Green, Ohio, is a singer/songwriter whose songs tell the stories of everyday life. With over 150 originals to his credit, he takes listeners on an eclectic lyrical journey from birth to death and everything in between. This legally blind artist sees the world in ways no one else does, and his unique perspective is reflected in songs which are funny, sad, poignant, and thought-provoking.

Tegge, who is best known for his clever wordplay and tight lyrics, believes that every word matters and that songs should tell an interesting story.

He performs year-round in northwest Ohio at festivals, community events, local bars and wineries. Tegge and his band have performed several times at the Black Swamp Arts Festival, including a mainstage performance in 2018. He is also a frequent guest on WBGU-FM's The Morning Show and the weekly Hump Day Revue.

He has written tribute songs for several organizations, including the National Tractor Pull, The Sight Center, and Honor Flight, and has penned numerous Christmas tunes.

Tegge plays acoustic guitar and harmonica and is often accompanied by his band The Black Swamp Boys, which consists of Dick Hermes, Matt Webb and Dean Rochester. 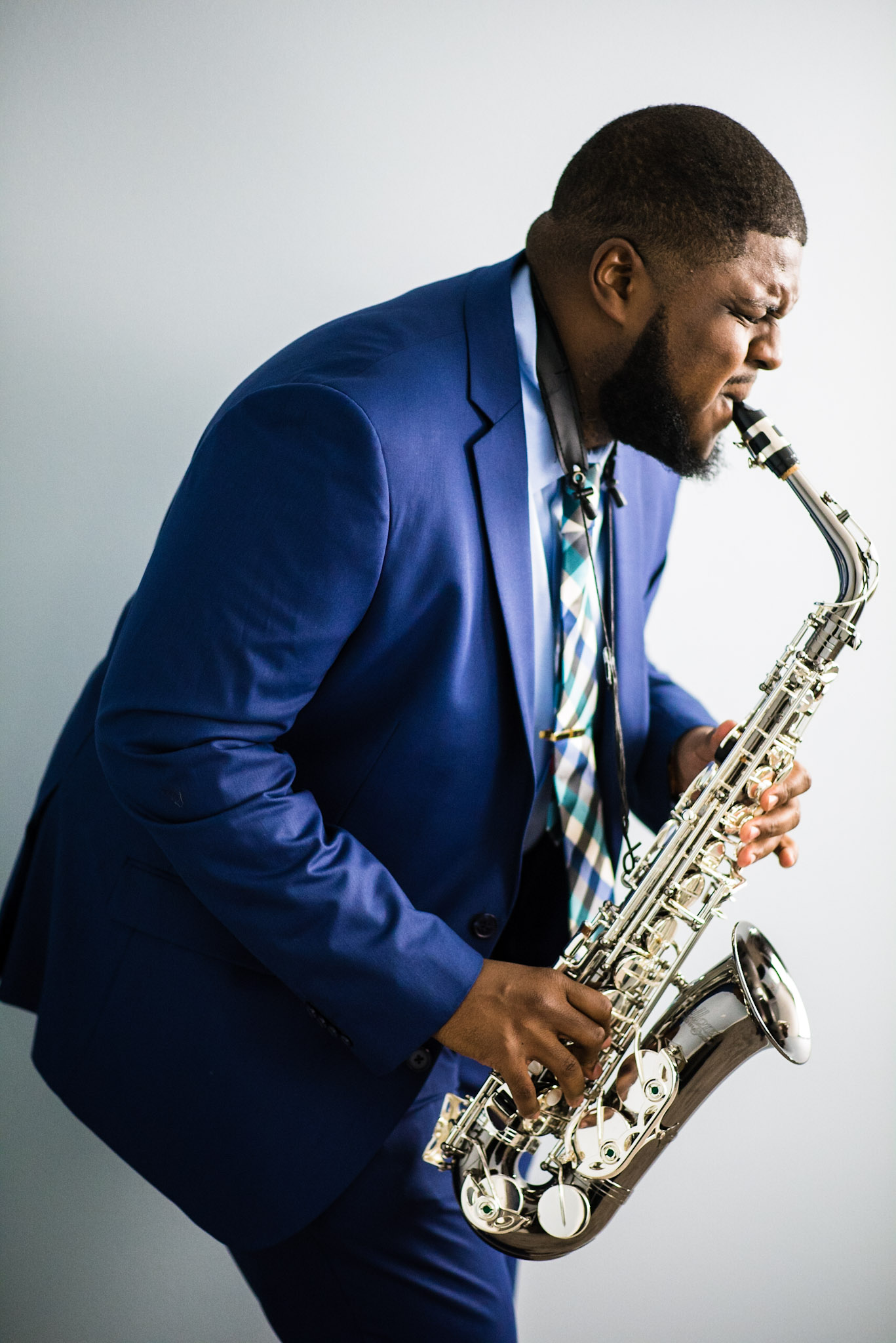 Mike Williams on Sax, is an Experimental Smooth Jazz saxophonist, who loves cross generational music; and the fusion of various musical genres and styles. He is originally from Cincinnati, Ohio; and has lived in the Greater Toledo area since graduating from Bowling Green State University in 2013. Mike serves as a musician for Family Baptist Church in Toledo, where he has played for the past eight years. Mike is also the official saxophonist for the Indie/Alternative Rock Band, Moths in the Attic. With a collective background in classical, gospel, pop, jazz, smooth jazz, fusion, funk, alternative rock, indie rock, and R&B; it is safe to say that his musical resume is very diverse. Mike has released several Extend Play Projects (EPs), which can be found on his website www.mikewilliamsonsax.com. Also, his newest EP Sax & Chill, a Smooth Jazz, R&B, and Hip Hop influenced project, is streaming on all digital platforms. He is currently composing his debut full-length album, which is projected to be released Fall 2021. Mike’s vision is to touch the world one note at a time, while having fun, and breaking musical barriers! He remains hopeful to one day advocate the restoration of music programing and funding in schools across the nation. 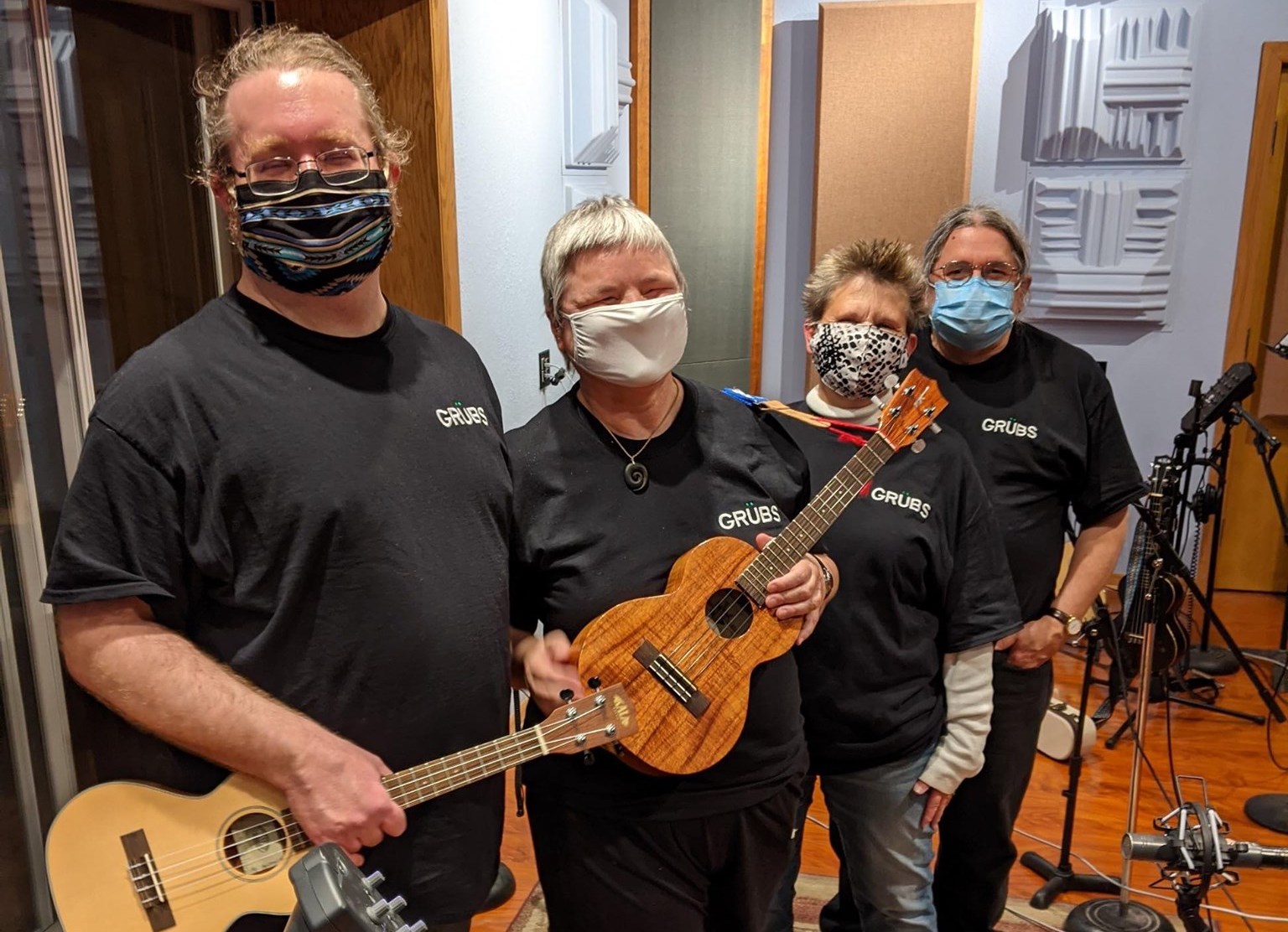 The Grande Royale Ükulelists of the Black Swamp (Jason and Sheri Wells-Jensen, Anne Kidder, not part of performance, and Geoff Howes) play all kinds of music on all kinds of ukuleles. The GRÜBS have been featured performers at the Black Swamp Arts Festival in Bowling Green and Mighty Uke Day in Lansing, and their recordings include a holiday album called Uke Tide.

The Annual Meeting Dinner & Awards recognizes outgoing Board Directors & Officers, and presentation of the Athena, Zeus, and Outstanding Citizen awards. 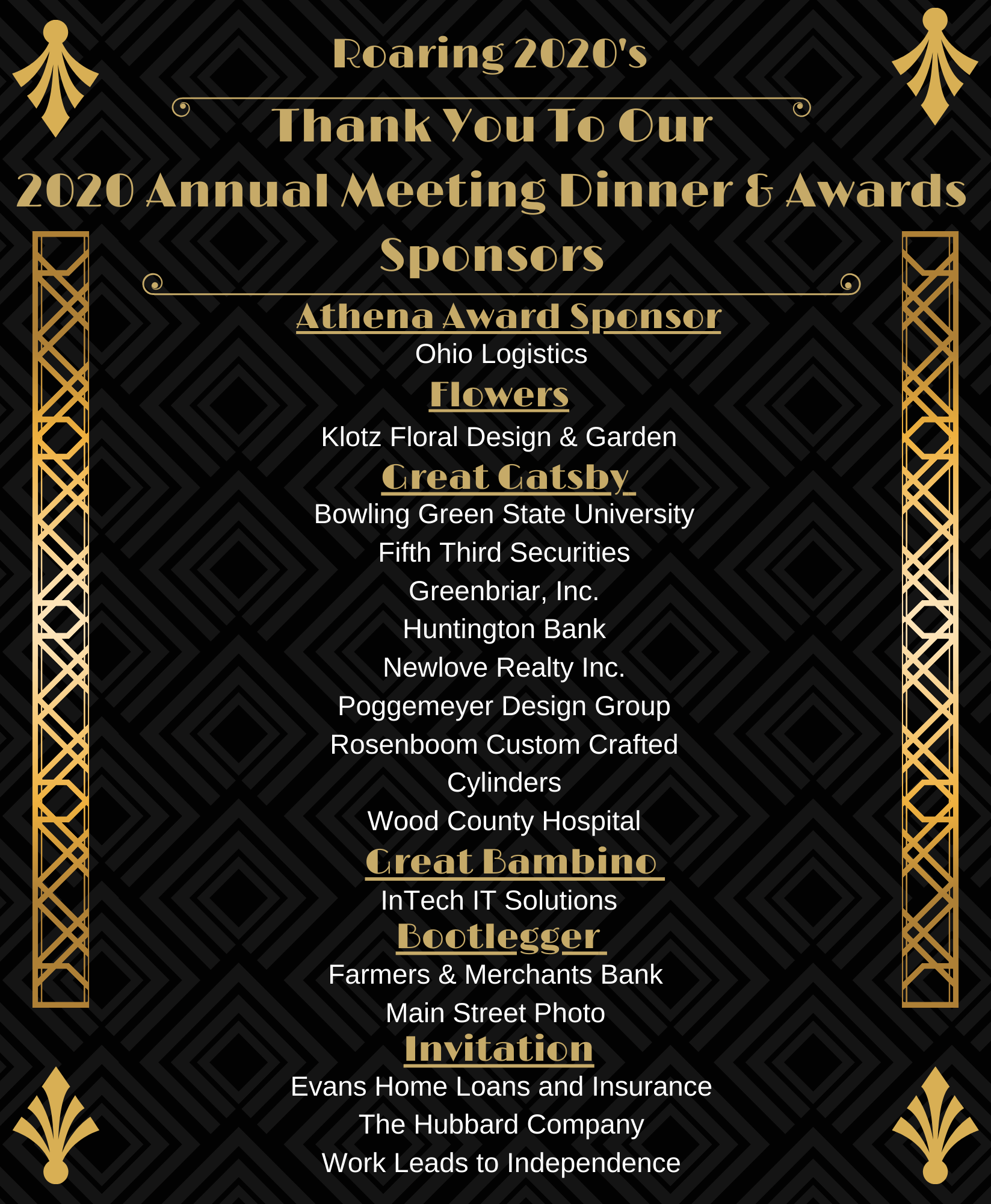 The BG Chamber of Commerce and Wood County Hospital host the annual Blood Analysis Program on a Saturday in April each year. The comprehensive blood analysis includes a complete cholesterol check with HDL, LDL and triglycerides, liver and kidney function. Additional available tests include the TSH thyroid test and a PSA test for men, each for an additional fee. Blood pressure checks are also offered. Proceeds from the event will go to support the Chamber Foundation and Wood County Hospital Foundation Scholarship Funds.

The Bowling Green Chamber of Commerce and Foundation, Fireworks Project Team, the City of Bowling Green, and Bowling Green State University have announced that this year’s Annual Community Fireworks will not go off with a BOOM.

Executive Director, Mary Hinkelman, stated “The decision to cancel the fireworks was unexpected. Conversations with BGSU as a part of our logistics meeting with the City brought new considerations to light.  We understand the importance of keeping our community safe during this pandemic and that has been and always should be our first consideration.  My heart aches for everything our community and our nation has had to forego this year.  I think everyone can relate to the disappointment we are feeling after putting so much energy and resources into our planning, re-planning and especially the fundraising.  We had hoped that things would improve so we kept making plans, but unfortunately they did not. The decision to cancel was in the best interest of our community. ”

“The Chamber of Commerce Foundation is so grateful for the support of individuals and business this year when we are all realizing tough times. Donors can rest assured that these donations and sponsorships are in a fund for the fireworks and will only be used for this community event.  We will continue to recognize these individuals on our website this entire year and 2021.   There was still a ways to go in those fundraising efforts and we were just about to announce our next two events.  We will pick up where we left off next spring.” 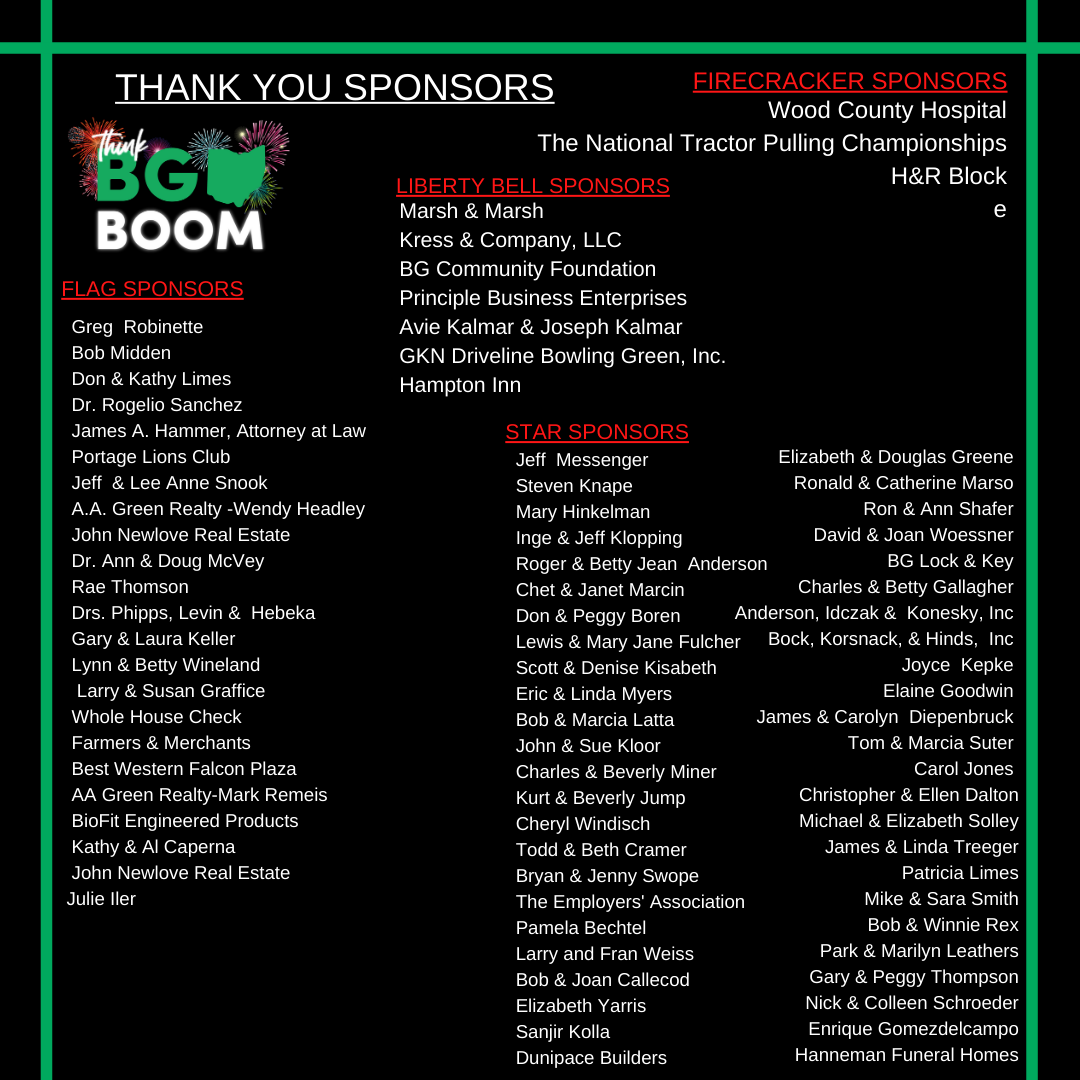 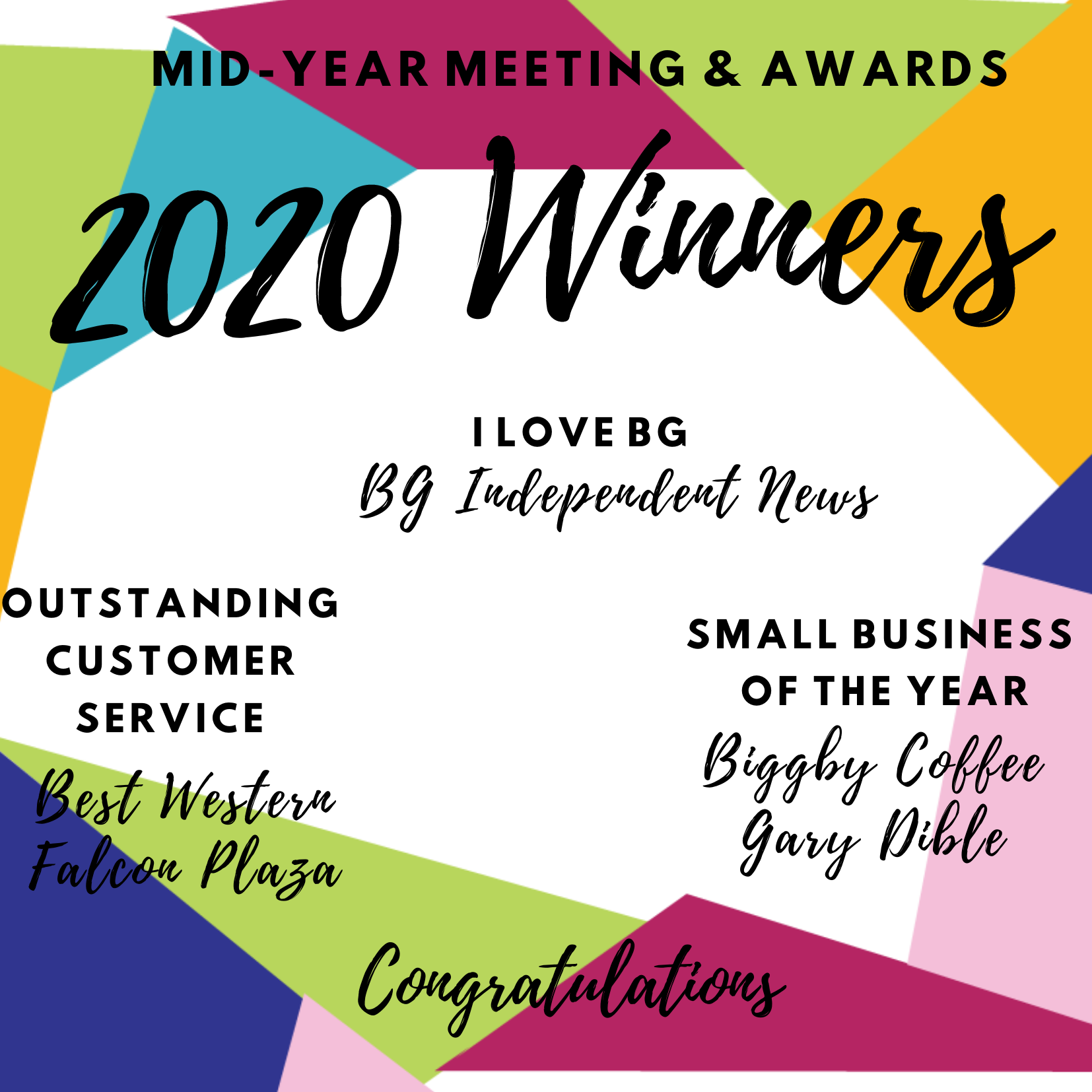 Held annually in July, The Mid-Year Meeting gives Chamber investors a chance to come together and reconnect. The program includes a featured speaker and the recognition of the Chamber Scholarship Award winner. The I Love BG Award, the Small Business of the Year Award, and the Outstanding Customer Service Award are presented as well.

This annual fundraiser helps to support the mission of the Chamber. Held the last week of August, it is time to relax and enjoy a day of fun, networking, and golf!

Congratulations to this year's winners: 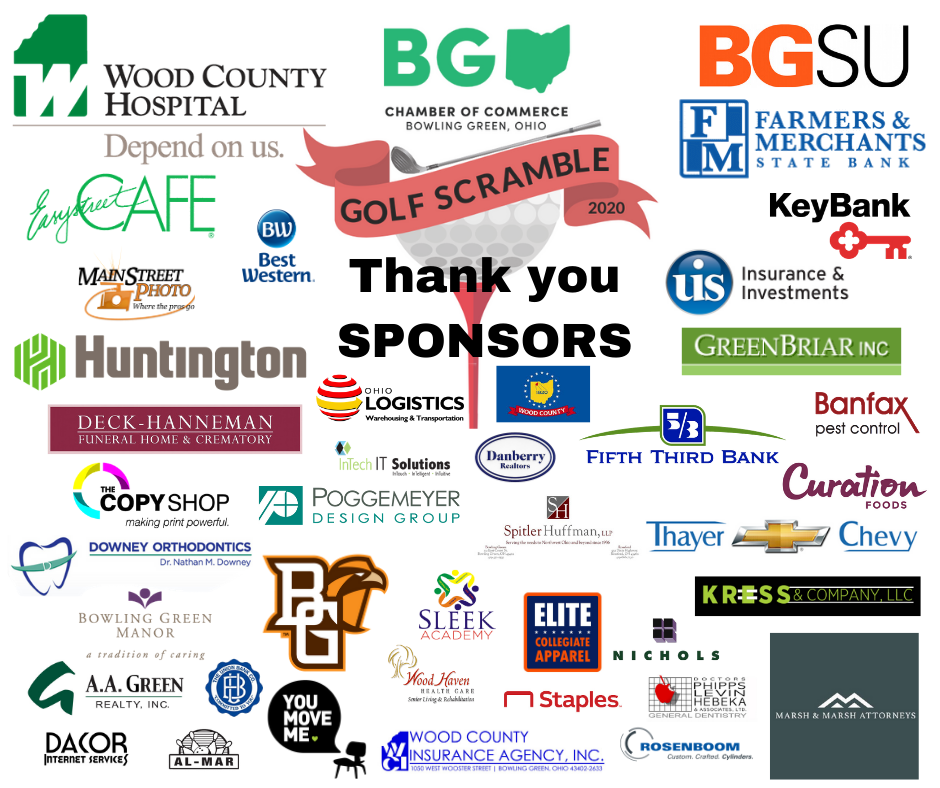